I love the Harry Potter books and have them all—each of the seven books in the series. I discovered them in 2000 after the first three had already been published and was so hooked that I recall pre-ordering each of the subsequent books prior to its release and devouring it right away after it was delivered—which was typically the day before it was officially released. And while I was thrilled when my kids also started to read and love the books as they grew older, I made it clear that the books were mine. In time, after frequent re-reading by my kids, whenever one of my Harry Potter books started to wear down, I would order another copy— hardcover, of course—so I would still have the complete set in near-pristine condition. In fact, I was so possessive about the books that I used to discourage my kids from lending my cherished copies to their friends, and even bought extra (paperback) copies just for this purpose!

Given my love for the books and the magical world that J.K. Rowling has so brilliantly created—so rich, so vivid, so detailed, and so much fun—I was really disappointed when the series concluded in 2007 with the publication of the seventh book, Harry Potter and the Deathly Hallows. But I could appreciate why. After all, J.K. Rowling could not continue the series endlessly—not only was she so rich and famous that she didn’t need to write any more, but to what extent can you drag a story on and on? Also, one of the charms of the Harry Potter books was that you knew they would come to an end after Harry defeats Voldemort and is finished with school. It was a good, satisfying conclusion to the saga of “the boy who lived.”

Thus, when I heard of Harry Potter and the Cursed Child, it seemed intriguing, even though it was in the form of a script for a play and was not actually written by J.K. Rowling herself, but rather by a playwright based on a story by her, supposedly the eighth in the series. While the play itself debuted last month in London and seems to be doing very well, the book itself has received mixed reviews from Harry Potter fans. Thus, I bought it with some trepidation, not wanting to cast a shadow on my experience of the original series and ruin my love for it.

It turned out that I needn’t have worried. I really enjoyed the book and finished it in one sitting. Even though the plot is set several years after the first seven books—Harry is now middle aged with three kids, all of whom are in the same Hogwarts School that he attended—the book keeps transporting you to many of the same events that happened in those years through the clever use of a time traveling device, the Time Turner, that plays such a key role in the third book, Harry Potter and the Prisoner of Azkaban. While the protagonist of the book is now Harry’s middle son, Albus, who could be the “cursed child” of the book title, the book brings back all the characters who had key roles in the earlier books, including Hermoine, Ron, Malfoy, Snape, and even Dumbledore. In an unexpected but heart-warming twist, Albus’s best friend at Hogwarts is now Scorpius, the son of Draco Malfoy, who was Harry’s archenemy throughout his own time as a student at Hogwarts. And there are many hilarious situations caused by the ripple effects of going back in time and changing certain events, including one where Ron is married to Padma (a Hogwarts student who made a very brief appearance in the earlier books) and has a son called “Panju.” As an Indian, I’m still laughing at that one!

That said, I wish the story was in the more conventional form of a book than a script for a play, which, by its very nature, is forced to be somewhat choppy. I really liked the plot of this eighth story in the series and felt it would have been so much more substantial and enjoyable as a book. I have no interest in seeing the play just as I had little interest in the movies­—although, admittedly, they did a good job of capturing the “magic” of Harry Potter’s world. Of course, the books have spawned a huge and very successful franchise with the movies, theme parks, and merchandise, and it’s a wonder to me that J.K. Rowling is even motivated to continue the series at all. I’m thankful, however, that the creative genius in her continues to create, bringing joy to the millions of Harry Potter aficionados that are out there, including adults like me who may otherwise be somewhat jaded by the “realities” of life.

Such is the power of the world of Harry Potter created by J.K. Rowling that I was fighting with my daughter about who got to read Harry Potter and the Cursed Child first. I prevailed, of course, but only because of my childish and rather pathetic excuse that I had paid for the book and so I should get to read it first. When does this ever happen? 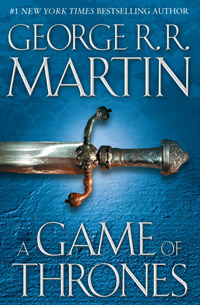 As time progresses, and the literary cannon grows and grows, every new writer born in some ways gets the short end of the stick. Why? Because so many ideas have been taken, some so worn out that they get labeled as “tropes” or “clichés.” Thus, modern writers often have the burden of having to find something original in a world in which so many things have been done before. Some make entire careers out of finding ways of subverting tropes, being antithetical, and therefore exciting. This is certainly the case with George R. R. Martin’s epic fantasy series, A Song of Ice and Fire. Martin takes the well-worn genre that grew out of the Middle Ages and peaked with Tolkien, and turns it on its head, making for a thrilling read.

One of the unwritten rules of fantasy, at last before Martin came along, was that the hero prevails. He beats the odds. It can be tough, but he makes it out alright in the end. Perhaps he experiences loss, the death of a sidekick or a horse or a friend, but he does not perish. This is not so in A Game of Thrones. Here, much like in real life, no one is safe. In that sense, this high fantasy novel reads a lot more like the turbulence of reality than many other, less inventive books. The novel ends with the beheading of a character who is set up, in every preceding page, as the hero. Martin impresses upon his reader that everyone has flaws, even the hero, and he does not get any special treatment in the randomness of fate.

A Game of Thrones further subverts the fantasy genre with its treatment of characters. The book refuses to vilify or venerate any one character. Instead, Martin allows you to understand the motivations of each character in turn, so that even if you don’t agree with their actions, you cannot blatantly hate them. By the end of the novel, the reader is left sympathizing with a man who closes the first chapter by pushing a seven-year-old boy out of a window. Only someone as adept as Martin can paint two sides of a person that well.

Finally, the novel’s female characters serve as a potent way to subvert traditional fantasy tropes. In most high fantasy, the women do not have their own agendas. They are tools, playthings, and trophies for the men who ride horses and fight wars and move them conveniently around the chess board of their own lives. This is not so in Martin’s book. While the novel is set in medieval times and thus realistically portrays appropriate historical subjugation of women, Martin balances this with determined female characters who not only have goals, but also the ruthless will to make those goals a reality. Like all his male characters, these women are nuanced, not just good or bad. One of the most popular characters in the sprawling cast is the young Daenerys Targaryan, who, sold into marriage by the brother, becomes empowered to gather an army in preparation to reconquer the Seven Kingdoms, which she views as her birthright. Another, incredibly three-dimensional character is Cersei Lannister, who, as wife of the king, is unhappy with her secondary status in the kingdom, and whose thirst for power and militant protection of her children often paint her hands red with blood. We are horrified by her, but we reluctantly admire her, and in hard times, we sympathize with her.

The book is split into differing perspectives, mostly of the main, clashing families of Stark and Lannister. It is also long, perhaps longer than it needs to be, but the world it builds is so colorful and riveting that you probably won’t find yourself complaining. Martin will not coddle his reader, which makes the book somewhat of a rollercoaster, with nail-biting climaxes and brutal deaths, but in the end, entirely worth it. Make sure the sequel is close at hand!

Reviewer: Sarisha Kurup is a senior at The Harker School in San Jose, CA.