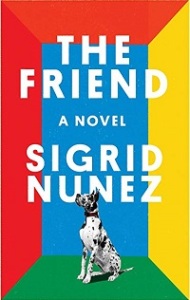 So far, I have not had a great track record with regard to liking award-winning books, so when I came across a recommendation for The Friend as the winner of the National Book Award for Fiction in 2018, I picked up a copy of it with some skepticism. But, it turned out to be a pleasant surprise — I actually liked this book! It was deep, as award-winning books invariably tend to be, but not at all dense. In fact, I found it an easy read, not just because of its relatively short length but also because of the writing style, which was simple and sparse, devoid of any literary flourishes. It takes a special skill to be able to pack an emotional punch using the simplest of language, and I was gratified to find that this was applauded by literary critics just as much as it was appreciated by me.

The Friend tells the story of a woman writer whose closest friend, a male writer, commits suicide and she ends up taking in his dog, who is equally devastated by his absence but cannot express it. Over the course of the next several months, both the woman and the dog end up finding comfort in each other. They are still grieving, but they grieve together rather than by themselves. The woman writer — the protagonist — lives alone and never married, and while she teaches writing, she never had any close friends apart from the man. He was actually her professor when she was studying to become a writer, and while they were not romantically attached — apart from the one time they slept together, at the suggestion of the man, as an experiment to see what it would like — they had become best friends and remained so for many years, right up to the time the man dies. Because the woman has no support structure, she would have unraveled from the grief, were it not for being forced to take in the dog. She does this only because she is begged to by the man’s wife, who tells her that she cannot look after the dog properly as it was in deep mourning.

The setting of The Friend is in Manhattan, and the protagonist lives in an apartment that does not allow dogs, which is another challenge that she has to contend with. The dog is an enormous Great Dane and is therefore impossible to hide, bringing with it the risk of eviction. The protagonist is advised by her acquaintances to give up the dog in order to be able to hold on to her impossible-to-find rent-controlled apartment, but she finds that she cannot. In the end, she applies for the dog to be considered as a support animal, and her application is accepted, allowing her to continue to stay in her apartment with the dog.

Apart from this, there is no conclusive “happy ending” for the book as such. It is simply a story of how a person and a dog bond with each other through their mutual grief for the person who is now missing from their lives. Just like the woman, the dog is at first so devastated by the absence of his owner that he can barely function. In time, however, both of them come to find some comfort by being with each other and settle down to an existence where they have accepted the pain and slowly learn to live with it.

While those who are dog-lovers would be able to completely relate to this story and vouch for the depth of love and feeling a dog can have for its owner, I found it very poignant and moving even though I am not a dog person. This is despite the fact that the book is not overtly emotional or sentimental. In fact, the grief is very understated, and with the protagonist being a writer, it captures her extensive ruminations on death, loss, suicide, and even writers and writing, all of which are extremely insightful. This is a book focused on thoughts and feelings rather than on things happening, because apart from the main cataclysmic event at the beginning, not much happens.

While the writing style is simple, it is also quite unusual. It is written in the first person — which is quite common — but the man who dies is addressed in the second person, as “you.” So the entire book reads like a letter addressed by the protagonist to the man who has died. None of the people, including the narrator, are named, except for the dog, whose named is Apollo. Even the man’s current wife and two ex-wives — he was quite a womanizer — are referred to as Wife One, Wife Two, and Wife Three. (I couldn’t help being reminded of Dr Seuss’ Thing One and Things Two from The Cat in the Hat.) Also, it was not clear if the “friend” from the title of the book refers to the woman, the dog, or the man who has died. It could be any of them, or it could be all of them.

In contrast to most books that are about death, suicide, loss, or mourning, The Friend was far from being the expected tear-jerker. While it does immerse us completely inside the mind of someone trying to cope with the irreversible loss of someone they love, the emotional punch it packs is a lot more subtle. I found that it had a meditative quality to it that made it seem much more like philosophy than fiction, and I am happy rather than bemused by its National Book Award win. It was very well deserved.

One thought on ““The Friend” by Sigrid Nunez”