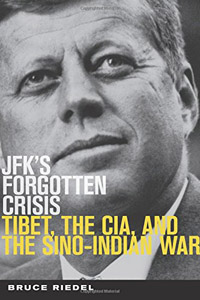 In 1950, Mao claimed he had ‘liberated’ Tibet. The monks at Lhasa were powerless, the Dalai Lama was 15 years old, and the world ignored the event. Nehru, at the time, had friendly relations with China. The US was understandably nervous about China. Moreover, a subtle power struggle had commenced between Russia and China leaving everyone confused.

The CIA sprang into action, setting up a surveillance operation near Dhaka (in the erstwhile East Pakistan) and flying U2 spy planes over Tibet in the late fifties. They had been doing this from Lahore and Peshawar earlier – until one of their planes was shot down by the Russians. Soon they discovered the Lop Nor nuclear testing facility – and Mao found out about the spy planes. Perhaps he suspected Nehru of complicity as the planes had to cross Indian air space.

The Dalai Lama’s escape in 1959 and the Tibetan resistance were masterminded by the CIA. India gave him asylum and accommodated him at Dharamsala. Meanwhile in Pakistan Ayub Khan came to power in a military coup. India soon discovered that China had built a major highway across the Aksai Chin region which was a part of Kashmir. Nehru demanded China’s withdrawal but Mao stood his ground. From then on, relations between the two countries deteriorated. Nehru’s Forward Policy of pushing forward military outposts in disputed territories in Aksai Chin and the northeast sparked off violent incidents.

In January 1961, John F Kennedy assumed office as President of the United States. He chose John Kenneth Galbraith as Ambassador to India. In time, both men would prove themselves to be true friends of India in her hour of need.

On 17th August 1962, the USSR and India signed a treaty of Peace, Friendship and Cooperation. China invaded India on 20th October 1962. At that precise moment, JFK was grappling with the Cuban missile crisis as the world came to the brink of nuclear war. Khrushchev was too busy to worry about India. Mao reportedly told him about his plans to attack India and the Russian didn’t bother to warn Nehru. (The treaty and his personal rapport with Nehru mattered little.) Khrushchev played a game with Fidel Castro as well, assuring Kennedy he would withdraw the nuclear warheads from Cuba, without consulting or informing Castro. It’s almost certain that Khrushchev had not told Mao about the nuclear missiles he had positioned in Cuba. Looks like he managed to fool everyone – except Kennedy.

Well, China grabbed Aksai Chin. And on 27th October, the hostilities ceased. The following day Khrushchev made a deal with Kennedy agreeing to remove the missiles from Cuba. The world breathed a sigh of relief. Nehru, however, had to eat humble pie, abandon his policy of nonalignment and send an SOS to Kennedy.

Washington’s response was swift and decisive. Besides Galbraith, the British and Canadian ambassadors in New Delhi appealed to their respective governments to join the effort to defend India. On 1st November, the USAF and RAF began airlifting arms and ammunition. Kennedy dispatched a high-level delegation to India. Ayub Khan demanded a slice of Kashmir as an inducement for staying out of the conflict. Kennedy, egged on by Galbraith, told him ‘don’t you dare’.

China attacked again on 16th November. The Indian army was completely routed on the north-eastern front and the narrow Siliguri corridor linking Assam, Nagaland Manipur and Tripura with the rest of India was on the verge of capture. India suffered heavy casualties. Thousands were taken prisoner, including Brigadier J P Dalvi who later wrote “Himalayan Blunder” castigating Nehru, Defence Minister Krishna Menon and Army Chief B M Kaul for their multiple follies. Indian politicians stayed away from the war zone. Indira Gandhi visited Tezpur near the Chinese frontline on 19th and 20th November. On 1st December China unilaterally withdrew from the occupied territories in India’s north-eastern sector. However, the Chinese held on to Aksai Chin. The war ended as abruptly as it had started.

Did Kennedy call up Mao and issue an ultimatum? Or was Mao dissuaded by the American response? It was revealed later had Mao had been making preparations for this assault for several years, building roads, infrastructure, and even POW camps along the border. Kennedy’s intervention undoubtedly saved India from dismemberment. His statesmanship during the Cuban missile crisis saved the world from Armageddon.

The following year the young president was assassinated in Dallas. Six months later Nehru died. In 1965 Pakistan attacked India and after 23 days of intense fighting, agreed to a ceasefire. Mao did not help Ayub Khan and his Defence Minister Zulfikar Ali Bhutto who made several visits to China to seek help. During the 1971 Indo–Pak war that culminated in the liberation of Bangladesh, China remained aloof, despite some prodding by Nixon and Kissinger. Senator Edward Kennedy on the other hand visited India in August 1971, toured the refugee camps in Bengal and deplored that American weapons had facilitated the massacre in East Pakistan. By the time the Kargil conflict erupted in 1999, India’s nuclear capability was no secret – and naturally China refused to get involved.

Bruce Reidel has done a decent job of analyzing data from various sources and drawing plausible conclusions. The book leaves us wondering if the fate of Asia would have been different if Kennedy had lived just a while longer.

Reviewer: Pushpa Kurup lives in Trivandrum, India and works in the IT sector.