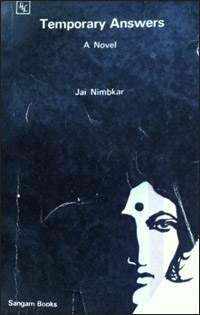 I came upon this book at a second-hand bookstore when I growing up in India, at a time when I pretty much devoured any kind of book that seemed remotely interesting. While most of the books I read during that phase were eminently forgettable, I really liked Temporary Answers and have held on to my copy of it all these years. Given that the book was originally priced at Rs. 4 and I bought it second-hand for Rs. 2, and that I have held on it all these years, and the fact that it is no longer even available—it seems like an unprecedented bargain! Family members and friends who read the book on my recommendation also really liked it, and I recently read it again to re-discover what was it about this unknown book by a relatively unknown author that had made me hold on to it and actually bring it with me to the US when I moved here from India.

Temporary Answers is very much an Indian story with Indian sensibilities written by an Indian author. It tells the story of Vineeta, a woman in her late twenties, who comes back to live with her parents after the sudden death of her husband, as per the custom at that time—the story is set in the 1960s, when women were not as financially and emotionally independent as they are now. Yet, Vineeta is far from a docile widow and soon breaks free from the claustrophobic confines of her childhood home to get her own place and start on a career as a pediatrician, for which she was trained but never practiced while she was married. The book charts her gradual independence as she navigates her way through tricky situations and complicated relationships. Her mother is a non-nonsense, working woman, but she tends to be somewhat autocratic and also very traditional in the sense that she cares deeply about what society thinks; her father is non-confrontational but also quite spineless; her younger sister is not just uncommunicative, but seems to actively dislike her; her U.S.-returned childhood male friend, who had a crush on her when they were kids, would now like to marry her, giving her an easy way out; and she is strongly attracted to an older man, a professor and playwright, and gets involved with him, but he has his own demons to deal with. Along the way, there are also lots of issues stemming from her fledgling pediatric practice and her work in a non-profit for poor kids.

None of these problems really go away or are neatly resolved; what changes is Vineeta’s gradual realization that there are no permanent answers to her existential crisis—she first has to come to terms with her own feelings of insecurity and “find herself” before she can find comfort and support through others.

What I really liked about Temporary Answers is how authentic it is. All the characters, including the protagonist, are flawed human beings, like we all are, so we can readily identify with them. Vineeta herself is far from a conventional heroine—she often says or does the wrong things and is propelled by her baser instincts, by feelings that are far from elevated. At the same time, she is very introspective and we get a chance to step inside her mind and witness the conflicting feelings she has about so many things, her ruminations on marriage and love, the difficulties of being a doctor including not just the helplessness but also the guilt for not always feeling the sympathy and empathy people expect doctors to have. Not only is this internal dialogue in the protagonist’s head so fascinating, Temporary Answers also has a lot of philosophical discussions between its characters about the meaning of life and death, which is something you don’t find that often in books. In essence, this is really a cerebral book, focused more on what the protagonist feels rather than on what she does.

Given that the book is set in India—in the city of Pune, or Poona as it was called then—in the 60s, I found it surprisingly contemporary, with Vineeta eventually living by herself and being visited often by the man she is in a relationship with, who often spends the night. And while she does not flaunt the relationship, she makes no attempt to hide it either, which would not have been easy in those conservative times. Also, while Temporary Answers is, by and large, a serious book, I did appreciate some occasional bits of tongue-in-cheek humor, usually as part of a conversation between characters. For instance, when Vineeta asks her mother—who all but manages the family and holds the reins of the household—if her husband (Vineeta’s father) had ever beat or mistreated her, her mother replied, “He wouldn’t have had the nerve.” In the book, Vineeta burst out laughing, and when I read that, so did I.