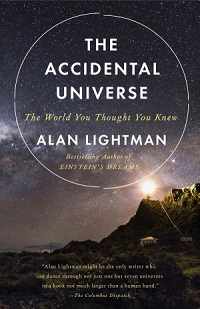 While it is all too easy to get caught up in our everyday lives—the daily grind, the demands, the challenges, the joys, the sorrows—all we need to do to get some sense of perspective is look up at the stars. Not only are we tiny specks on one planet which itself is part of a solar system comprising other planets, that solar system itself is one of millions of such stars in our galaxy, the Milky Way, which itself is one of millions of galaxies in our universe! And as if that is not enough to make us feel completely insignificant, space scientists are now postulating that our universe may actually be one of multiple universes—a “multiverse.” If that is true, the implications are even more staggering, making us even less than insignificant in the larger scheme of things—if such a thing is even possible.

For those who find this “bigger picture” intriguing and fascinating and would like to understand it better, The Accidental Universe is a must-read. Written by Alan Lightman who is both a theoretical physicist and a writer, the book is able to take the concept of space­—the science of which is incredibly complex—and present it in humanistic terms that everyone can relate to. And this is really important for anyone trying to understand their place in the universe without having to devote their lives to becoming space scientists, astronomers, astronauts, or theoretical physicists like Lightman—because any of these professionals could spend their lifetimes doing what they do without pondering on the personal implications of what they are studying, or even if they do, lacking the ability to express it. Who better than a writer to present the complex science of space in a non-scientific way that is accessible to everyone, and most importantly, to still preserve the feeling of awe at the idea of being part of something so mysterious, so magical, so “out of the world”?

Although the title of the book is The Accidental Universe, it is actually a collection of essays on several different aspects of the universe in addition to accidental, such as temporary, spiritual, symmetrical, gargantuan, lawful, and disembodied. Each of these chapters makes for a fascinating read in and of itself, although I found that the first chapter on the “accidental” universe seemed to be the crux of the book, capturing most of the current ideas and discoveries about the universe. It seems to provide an answer to the most fundamental puzzle of our existence, at least of the physical aspect of it, namely: How come? How come there is life­­—of which we are a part—on this planet?

The answer, based on current cosmological discoveries and thought, seems to be that our universe is only one of an enormous number of universes, each of which has different properties and laws; and of all the possible permutations, the universe we live in happens to have the properties to support life as we know it. (Hence, the term “accidental.”) For all we know, any of the other universes has the properties to support an entirely different kind of life. We can only conjecture about this rather than know for certain, as current science has not reached beyond the boundaries of our own universe. And given that even within our own universe, stars are billions of light-years away and that our own life spans are only about a hundred years, it seems impossible to know for certain. In fact, we do not even know for sure whether there is life elsewhere in our own universe apart from on our little tiny planet, although it seems difficult to imagine why there shouldn’t be.

We seem to getting into the realm of science fiction here, but The Accidental Universe makes no such conjectures or predictions about life elsewhere and instead remains firmly rooted in the actual science of what we know. At the same time, the book also veers into topics that would seem more philosophical than scientific. For example, with regard to the fundamental existential question of why we exist, we need to keep in mind that the only reason why this question is raised in the first place is because we are here, in this universe, to ponder it. As Lightman so eloquently puts it, “From the cosmic lottery hat containing zillions of universes, we happened to draw a universe that allowed life. But then again, if we had not drawn such a ticket, we would not be here to ponder the odds.” The idea is a bit of a mind-bender, but the bottom line is that even if we were not here, if the happy accident of our particular universe supporting our life form did not happen, the world comprising these multiverses would still exist. We would not be here to ask what life means, as we would not exist. So should we ask for meaning in life simply because we exist?

It’s a tricky question, as human beings have a deep-rooted need for meaning in their lives. Perhaps by learning more about the universe, ours as well as the many others that might be out there, we might come to realize that the question itself makes no sense and therefore the search for meaning is futile. By a random chance, we exist, so let’s just make the best of it.