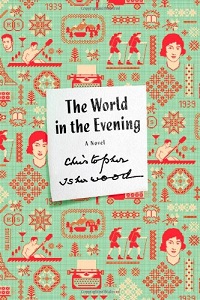 I have always loved to read fiction, but I have been going through a drought lately when it comes to finding something to read that holds my attention and makes me care about the characters, that makes me lose myself in a book as I always did since I was a kid. Over the holidays, I tried reading several critically acclaimed books that had recently been published including the Booker-prize winning The Underground Railroad by Colson Whitehead, Swing Time by Zadie Smith, and Here I Am by Jonathan Safran Foer; but I found that I couldn’t care enough about the plot and the characters to stick with them beyond the first chapter. Then, on a trip to New York City, I visited its famous Strand bookstore where, in the course of browsing through the thousands of books it carries, I came across Christopher Isherwood’s The World in the Evening. I have been a fan of  Isherwood’s writing ever since I read his A Meeting by the River several years ago, which I still rate as one of the best books I have ever read. Isherwood was a contemporary of Aldous Huxley and Gerald Heard, and is best known for his The Berlin Stories book, which was adapted into the hit movie, Cabaret, starring Liza Minnelli, as well as for his book, A Single Man, which was also made into a movie starring Colin Firth. Thus, when I came across The World in the Evening, I picked it up immediately, hoping it would bring back some of the enjoyment of fiction that I have always had until now.

I found this true for The World in the Evening, for the most part. Set around the time of the Second World War, the book is centered around the experiences of a young man, Stephen, in his early thirties, including his first marriage when he was in his twenties to a woman who was twelve years older than him, his brief affair with a young man while he was still married to his first wife, and his second marriage (after his first wife dies) to a young, carefree, rather hedonistic woman, which ends disastrously after he finds out that she is having an affair and walks out on her. Most of the book is in the form of reminiscences he has when he is holed up in bed for several weeks after being hit by a truck when visiting his childhood home in rural Pennsylvania, where he comes after walking out on his second wife. He has extended conversations with the people looking after him, which include his adopted aunt who has been like a mother to him (his own died when he was very young); a war refugee from Germany his aunt has taken in, who is uncertain about the fate of her husband as a war captor; and his doctor, who is homosexual and lives with a man whom the conservative community they belong to is determined to view as just a “roommate.” In the course of his conversations with these people, his perusal of his first wife’s letters – she was a famous author – a collection of which he might publish, and the memories triggered by them, we come to know the details of his life, the ups and downs he has gone through, his own feelings about them, and what has motivated him to do what he has done.

What struck me most about this book was how self-introspective it was —Stephen lays bare all his bad behavior, his petty jealousies, his irrational rages, and his many contradictory feelings for us to see. Ultimately, he comes to perceive everything bad that has happened to him as his own fault, caused by how he thinks and acts rather than by bad things happening to him. It is refreshing to come across a story in which the protagonist realizes that it is their own attitude and behavior that is primarily responsible for the trials and tribulations they are experiencing in life. It is also how eventually Stephen is able to resolve his problems, put his demons to rest, and find some measure of peace and acceptance in his life. It seems to be an important lesson for all of us.

Also, given that the book was written in the early 50s, I was amazed by how frank it was about sex and sexuality, both straight and gay. The main character was, for all practical purposes, heterosexual but still has a homosexual fling, showing that the divide between homosexuals and heterosexuals may not as rigid as is commonly believed. In the present day, we would call Stephen’s character bisexual, but at the time the book was written, there was no such concept, and Stephen is not at all conflicted about his fling with a man, despite being clearly attracted to, and married to, women. In fact, the only guilt he feels is in the fact that he is cheating on his wife. The fact that it is with a man is almost inconsequential to him.

The World in the Evening is a great example of the kind of book I like —where the focus is simply on telling the story without resorting to linguistic tricks or stylistic cadences. There are no examples of “beautiful writing” to showcase here. It was a little long-winded at times and did not come anywhere close to the brilliance of A Meeting by the River, but it was eminently readable, engaging and held my attention throughout.