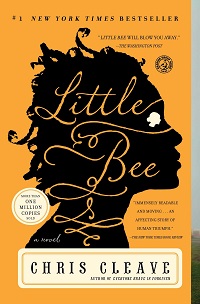 Little Bee is a highly acclaimed novel that was published several years ago in 2008, but which I came upon only recently. Going through a dry spell lately with books that are able to engage and sustain my interest, I started Little Bee without much hope and was pleasantly surprised to find that it held my attention throughout, and was, in fact, difficult to put down, especially towards the end. The story is extremely compelling and is told in a simple clear-cut manner without any literary flourishes or pretensions. This is exactly the kind of book I like – where the focus is entirely on the story and the writing is simply a means to tell it rather than an end in itself.

And oh, the author is British, and perhaps I am biased, having grown up with mostly British authors in India, but I feel an easier and more immediate affinity with British authors than with American ones. Many of the books that I have really liked (and written about here) in recent months have been from British authors such as Paula Hawkins (The Girl on the Train), Clare Mackintosh (I Let You Go), and Fiona Barton (The Widow), not to mention long-standing favorites such as J.K. Rowling and Agatha Christie. I was not surprised to learn that the author of Little Bee, Chris Cleave, had won the Somerset Maugham book award in 2006, given that Somerset Maugham is one of my favorite authors and I love all his books (including The Razor’s Edge, which I recently re-read).

Getting back to Little Bee, the titular character of the novel is a Nigerian refugee girl who escaped from extreme brutality in her country and travelled to London as a stowaway on a cargo ship, was caught and held at a detention center for two years, and then one day is suddenly let out (with a group of other girls, one of whom has bribed a detention officer to let them go). Even though Little Bee — which is the name she takes on after escaping Nigeria — is no longer imprisoned in the center, she is still an illegal immigrant and therefore not free. Not knowing where to go or what to do, she ends up contacting the only people in England that she knows—Sarah and Andrew, a couple that she met on a beach in Nigeria on that fateful day when she and her sister were trying to escape from the men hunting them down. (The turmoil and killings in Nigeria at that time, in the mid to late 2000s, were related to the oil reserves that had just been discovered there and which were being seized by “the oil men,” who got local thugs to eliminate entire villages where the oil was located by killing all the locals en masse.) Little Bee and her sister appeal to Sarah and Andrew to save them from the men, but eventually, only Little Bee is let go, thanks to a spontaneous, courageous act by Sarah — she hacks off one of her fingers in response to the men’s demand that Andrew give them one of his fingers in exchange for the sisters’ lives. Andrew cannot do this, and the men retaliate by assaulting and killing Little Bee’s sister.

This momentary weakness, all the more stark in contrast to his wife’s courage, continues to haunt Andrew and causes further strain in his relationship with Sarah. When contacted by Little Bee two years later after she is set free from the detention center, the past catches up with him and he commits suicide, leaving Sarah to fend for their four year old boy on her own. Then there’s the arrival of Little Bee, whom Sarah takes in. It brings back for her all the horrific memories of that fateful day at the Nigerian beach, yet at the same time, she finds comfort in her presence, not to mention the fact that Little Bee is very good with Sarah’s son. So what ultimately happens with these two women? Is Little Bee found by the authorities and deported back to Nigeria? Or does she continue to stay with Sarah? Is Sarah able to come to terms with Andrew’s suicide, her guilt at the extramarital affair she has been having, and her feelings of inadequacy and helplessness at not being able to help Little Bee beyond saving her life just that one time? What about all those people whom she was not able to help? What about Little Bee’s sister, who was so brutally assaulted and killed shortly after their encounter at that beach? Can Sarah do something now, or will she continue to be haunted, just like Andrew was?

While I don’t want to give away the ending, I have to say that the book had a very satisfying conclusion – very realistic and believable without being overtly mushy or unbearably depressing. In addition to just telling a story, it makes a very strong statement about refugees, political asylum, detention centers, the contrast between the first world and developing countries, and what even ordinary individuals like us can do. In the current world scenario with the growing refugee crisis, I found the book remarkably prescient. It manages to be tragic and uplifting at the same time, which is quite an achievement.

Little Bee
Author: Chris Cleave
Publisher and Date: Originally published as The Other Hand by Sceptre in August 2008; Reprint edition published by Simon & Schuster in February 2010