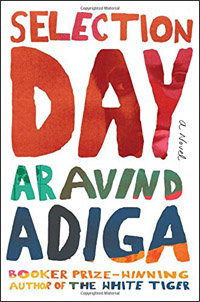 Selection Day is the new book by Aravind Adiga, who hit a jackpot in 2008 with his debut novel, The White Tiger, which won one of the most prestigious and highly coveted literary awards, the Man Booker Prize, that year. I recall reading The White Tiger when it came out, and while I found it a decent read, I didn’t think it was that spectacular as to win the Booker prize. At the same time, I don’t always find award-winning books as good as they are heralded to be by the critics who are largely responsible for determining which books win awards, and this is something I have come to accept. So it was primarily out of curiosity – and the recommendation of a friend – that I picked up a copy of Selection Day, which has just been published.

Selection Day is unabashedly about cricket, and it tells the story of two brothers who are being groomed by their father to be cricket superstars and make it to the Indian cricket team. The “selection day” of the book’s title refers to that crucial day when tryouts are held among 18-year old cricket aspirants to determine who will make it to the next level – starting with the regional level which is the starting point for anyone aspiring to make it to the state level, and finally, the national level. The protagonist of the story is the younger of the two brothers, Manjunath. For most of their childhood, he was always considered to be second-best to his older brother, Radha Krishna, and it’s something his brother, his father, and he as well take for granted. Things change when he suddenly becomes a better player than his brother, which leads to sibling rivalry, jealousy, and even deep disappointment for his father.

In addition to the cricket obsession that Manju’s father has which has dominated their lives, other aspect of Manju’s personality that gradually become evident, and which the book is focused on, is his possible homosexuality – through his friendship with and growing attraction to Javed, one of his brother’s peers who used to play cricket with them. Javed is like the typical “bad boy” – the rich kid – in contrast to the simple and poor, almost uncouth, Manju. But, of course, this doesn’t eventually work out – that would have been too simplistic. Manju starts going out with girls, but remains a closeted homosexual. While Radha loses his cricketing prowess at about the same time Manju starts shining and makes it through the “selection,” this loss of luster eventually happens to Manju as well and he is replaced in the hearts and minds of the cricketing-obsessed public with a new cricketing “prodigy,” reinforcing the fact that fame and glory are fleeting, ephemeral.

The story in Selection Day, as I have captured it here, seems pretty straightforward, and it could have been the basis for a really good book. But I found Adiga’s telling of this tale so contrived, so difficult to follow, that I have to rate it as one of the worst books I have ever read, or rather, as one of the worst books I have actually finished—most of time, if I don’t find a book engaging after the first few chapters, I don’t bother continuing to read it. In the case of Selection Day, I stuck it out till the end as it had been recommended by a friend and I wanted to give it a shot. I even went back and re-read The White Tiger, hoping it would give me a better perspective on Adiga’s writing. But it didn’t. Adiga’s writing seems to have become much more convoluted since that debut novel, with characters so weird and behaving so strangely that they are hard to relate to, and the liberal use of profanity throughout the book.

That the book is so much about cricket was not a problem for me, as I was as much into the game growing up in India as the rest of that cricket-obsessed nation. It was the entire rest of the book that I couldn’t get.