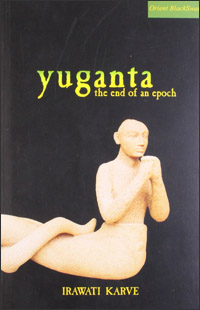 I read M T Vasudevan Nair’s “Bhima -Lone Warrior” (Malayalam original ‘Randamoozham’) and Kavita Kane’s “Karna’s Wife: The Outcast’s Queen” before I read Karve’s “Yuganta”. None of these would make sense unless you’ve read the Mahabharata. This great epic which comes to us in simple Sanskrit verse tells the story of a family feud that ends in an 18 day battle at Kurukshetra. It is generally believed that this happened around 1000 B.C.

“Yuganta” reads like a collection of essays rather than a novel and the author brings her own unique perspectives and interpretation to the characters and events. When she speaks of Draupadi, Kunti , Gandhari, Krishna and Karna, she paints different shades of their complex personalities. “The Mahabharata,” she says, “is a record of human beings with human weaknesses.” She attempts to explain the deification of Krishna and points out that the Krishna of the Mahabharata is an ordinary mortal with only rare flashes of divinity (that could be attributed to later additions in the text). Krishna is killed by a hunter’s arrow and the Yadava clan is wiped out in violent internecine quarrels. The author suggests that the few miracles in the Mahabharata could be later additions.

One can learn a lot about the Mahabharata from the Introduction to this book, e.g. the names of the 18 divisions in the critical text together with the number of couplets in each. There are stories within stories and the thread of the main storyline is taken up after several digressions. The author notes that the Arabian Nights follows this model of narration. Karve is highly critical of Bhishma. She points out that he is more of a match-maker than a warrior. He never fought any major battle. However, he abducted the three princesses of Kashi in order to marry them to his half-brother Vichitravirya. Amba committed suicide by self-immolation, while Ambika and Ambalika were forcibly married to Vichitravirya. Later Gandhari was brought from a faraway land to marry the blind Dhritarashtra. Pandu was afflicted by vitiligo (or so I believed) but Karve describes him as an albino.

She goes on to say without mincing words, “Kunti, stout and no longer young, and the lovely Madri were married to the impotent Pandu.” She notes that Bhishma paid an enormous bride price to acquire Madri. Dhritarashta, Pandu, and the Pandavas (Karna included) were all conceived by the ‘niyoga’ method, involving the use of a substitute male stud in order to produce heirs. Pandu retired to the forests of the Himalayas with his two queens in the prime of his youth for no apparent reason. That is how Dhritarashtra became king.

Karve suggests that Pandu’s motive was to hide his impotence and obtain heirs by resorting to ‘niyoga’. Karve says of the Pandavas that they “were more concerned with getting a share of the kingdom and in keeping peace than in revenging the insults to their wife.” She emphasizes their pitiful request for five villages, which was turned down by Duryodhana. She notes that “Draupadi’s wrongs were avenged only by Bhima,” as it was he who killed Keechaka and later Dushasana. Dhritarashtra says to his wife after the war has ended, “We Kuru men have done great injustices to women. And we have paid in full for them too. In Amba’s wrath Bhishma was burned. I am still burning in yours. My children too have been destroyed in it. Kunti was also married to a deficient man…” He continues, “You feel, Gandhari, that you have been cheated and deceived, but think for a moment: in the three generations of our family every person has been cheated and deceived.”

The author triggers many speculations citing ‘circumstantial evidence’. Is Yudhishthira really the son of Vidura? “When they were planning to call gods to father the children, it is very curious that the first god Kunti called was Yamadharma, the god of death,” Karve observes. She also raises some key questions. Did Krishna and Arjuna burn the Khandava forest in order to acquire more land for cultivation? Why was this made out to be a valorous feat? “Did Krishna and Arjuna feel that they had to kill every creature in order to establish unchallenged ownership over the land?” The Nagas were slaughtered in the process. Were they humans? An event that occurred during the Pandavas’ exile would be of interest to environmentalists: The Pandavas were constantly hunting because they had a large retinue to feed. One night, a stag appeared to Dharmaraja in a dream and said, “King, you are killing so many of us that we are on the way to extinction. Go into some other forest; give us respite. When we are multiplied enough you may come back.”

Karve calls attention to some interesting facts that may have eluded the casual reader. For instance, the Mahabharata makes no reference to writing. It appears that the Brahmins and Kshatriyas of the Mahabharata never did any writing, for messages were communicated through live messengers. The author reminds us that Indraprastha and Hastinapura have vanished from history but fails to mention that Kurukshetra and Dwaraka remain to this day.