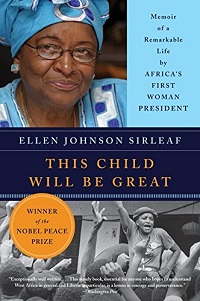 Ellen Johnson Sirleaf was Africa’s first woman president and this book is her memoir. She recounts how she came to power in her native Liberia and the tremendous odds she had to overcome to get there. Sworn in as President in January 2006 at the end of a fourteen year long civil war, she remained at the helm for 12 years and oversaw a peaceful transition. Liberia went to the polls in October 2017 to elect a new leader.

The book reveals the complexities of Liberia’s links with the New World and its long and painful history. While the slave trade saw Africans shipped from West Africa to the Americas to undergo forced labour, there was a reverse flow of freed slaves to these shores in the early 19th century. Monrovia, the capital of Liberia is named after US President James Munroe and the country’s flag resembles the American flag. The settlers thought they were somehow superior to the indigenous peoples and the seeds of conflict were sown. Liberia’s first President was a man born in Virginia.

Ellen’s paternal grandfather has eight wives and god knows how many children. Her maternal grandfather, a German trader, had married a local woman and the couple had one daughter. At the start of World War I, Liberia expelled all Germans, to demonstrate its loyalty to the US. The grandfather returned to Germany and was never heard of again.
Ellen’s father was the first indigenous man to be elected to the legislature. He suffered a paralytic stroke while in his early forties and soon the family fortunes nose-dived.

At 17, Ellen fell in love and married James “Doc” Sirleaf, who had just returned from college in Alabama. They both found jobs and had four children in quick succession. When James moved to Madison, Wisconsin to study further, Ellen went too, leaving the grandmothers to care for the little ones. She studied at the Madison Business college, and worked part time, sweeping floors and waiting tables.

“In Madison I was so cold I sometimes feared my tears would freeze.” James was alcoholic and abusive and Ellen had to learn to cope. “Doc always did enough to hurt but not enough to maim or kill. Just enough to keep me in a state of fear.” Twice he put a gun to her head but did not shoot. She knew that if she walked away, or even if her husband did, she would lose custody of the children. When they returned to Liberia, James did, in fact, take away the children from her. Following their divorce, he remarried and moved to Florida with the youngest child.

Ellen had a government job and soon she had an opportunity to study at Boulder, Colorado and Harvard. She had already created ripples in government circles by criticizing the powers that be. Her American education, work experience and contacts stood her in good stead as she returned to Liberia and slowly but surely worked her way up the political ladder. When the President of Liberia died in 1971 and a new President came to power, Ellen was offered a new job- that of Deputy Minister of Finance. Eight years later there was a coup. Ellen left the country and took up a position with the World Bank.

Liberia had enjoyed political stability for century but glaring economic disparities threatened the delicate equilibrium and the insensitivity of the men in power brought things to ahead. The Rice Riots saw police fire upon a crowd of demonstrators killing at least 41. Soon thereafter at a conference of the OAU (Organization of African Unity – now African Union) in July 1979, President Tolbert remarked that the most pressing problem of the continent was apartheid in South Africa. The following month Ellen was made the first female Finance Minister in the nation’s history. A year later there was a coup and president Tolbert was killed. Only four ministers were spared – and Ellen was one of them.

The United States bolstered the new government and Liberia soon became the CIA’s main station in Africa. Ellen went back to the World Bank and later worked for Citibank. By then three of her sons were studying in the US.

Ellen never ceased political activity. She was arrested and sentenced to 10 years of hard labour for speaking out against the government. But she was offered clemency due to intense pressure from Citibank and elsewhere. One of the messages passed to her in prison had read, “We’d rather have a live ant than a dead elephant.” Of her subsequent flight from her homeland Ellen writes, “As much as I wanted to stay in Liberia, I wanted even more to stay alive. It was time to go.”

In 1990 civil war erupted and there were massacres in Monrovia followed by a massive exodus to neighbouring countries and total internal displacement of indigenous peoples. A Boston Globe reporter was told by a local, “The dogs ate the dead, and we ate the dogs.”

The book is one long politico-historical story that almost eclipses the personal. But there are interesting insights too, not entirely about Africa. For instance, the Confederate general Robert E Lee freed most of his slaves before the Civil War and offered to pay for their passage to Liberia. Wow! Do you think his statues ought to stay?