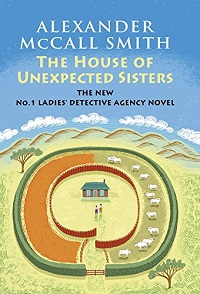 This is the latest book in the No. 1 Ladies Detective Agency Series, which I absolutely love. I own all the books in the series and have previously written about the 17th book that was released last year, Precious and Grace.  I find the newer books in this series every bit as enjoyable as the first, which was published all the way back in 1998. This a remarkable achievement for any writer, even one as prolific as Alexander McCall Smith, who writes other series as well as stand-alone books (such as My Italian Bulldozer, which I also wrote about recently). It recalls other favorite authors of mine such as Enid Blyton and Agatha Christie (who are no longer alive and cannot write any more books) as well as J.K. Rowling, who seems to be done with Harry Potter but is still continuing to write the Cormoran Strike books under the pseudonym, Robert Galbraith.

What never ceases to amaze me about the No. 1 Ladies Detective Agency Series books is how they manage to capture the sights, the sounds, and even the smells of Botswana, where the series is set. I have not personally been to Botswana, but the country seems so familiar to me because of these books. What is also amazing is how McCall Smith is able to write from the point of view of an African woman, Mma Ramotswe, who is the protagonist of the books and the proprietor of the No. 1 Ladies Detective Agency. It’s almost as if he is able to get into the skin of the character — she seems so real, so authentic. I know that this is what all writers aspire for, but it seems to me that there are few writers who are able to inhabit the character of someone who is so diametrically different from them as Alexander McCall Smith, a Scottish man, is from Mma Ramotswe, an African woman. He did spend a part of his childhood in Botswana, however, which is probably where the “heart” of the novels comes from. He is able to capture his love for the country in these books so beautifully that, as a reader, you can’t help falling in love with the country yourself.

The House of Unexpected Sisters returns with its familiar cast of endearing characters: Mma Ramotswe, who runs the detective agency and is an old-fashioned, “traditionally built,” astute woman; her prickly assistant, Mma Makutsi, who has promoted herself throughout the series and is now the “co-director” of the agency; Mr. JLB Matekoni, Mma Ramotswe’s husband who is a mechanic and runs the garage that is co-located with the detective agency; Charlie, a part-time apprentice at the garage who also occasionally helps out with detective work, and whose main interest in life is “girls”; Mma Potokwani, the matron of a nearby orphanage who is the closest friend of Mma Ramotswe and makes irresistible fruit cake; and Mr. Polopetsi, a school teacher who is also a part-time colleague at the agency. While the main “case” in this book that the agency investigates is a woman who seems to have been unjustly dismissed from her job, the other big mystery is a personal one for Mma Ramotswe — the discovery of another woman who shares the same last name, which might point to Mma Ramotswe’s father not quite being the man she looked up to and revered.

As in all the books in the series, each one is focused only on two or three cases for the detective agency rather than being a “thriller” as such — the focus is more on the characters, their daily lives, their conversations, their thoughts, and their relationships. Reading all the books sequentially makes you feel like you are growing up with the characters, you know them so well. What I also love about these books is how funny and chock-full of witticisms they are, with the humor coming naturally from everyday thoughts and conversations rather than tacked on. For instance, in The House of Unexpected Sisters, Mma Ramotswe and Mma Makutsi are discussing why more and more women think that the shorter a skirt, the more fashionable it is, and Mma Makutsi comments: “I do not understand that. Men know that women have legs — that is one of the things that they learn at any early age. So why do you have to show them that you have legs when they are already well aware of that?”

Now who can argue that that?