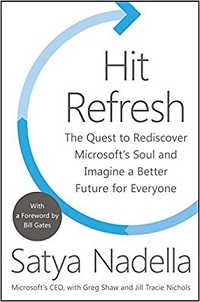 I typically do not read business books. However, the author of this book, Microsoft CEO Satya Nadella, recently appeared on a talk show that I watch, and I was intrigued. Not just by the premise of the book — when do you hear the word “soul” in the context of a technology company? — but by Nadella’s own story. I found out that his son has severe cerebral palsy, and this topic only came up because he was talking about the power of technology to do good, exemplified by some students from the local university who had rigged his son up with a device that allowed him to play music on his own. While that was a truly inspiring example of how technology can help, what I found even more inspiring is how he had achieved so much, risen to lead the leading technology company of the world, all while having a very challenging personal life. Usually when I read about highly successful people, I assume that they must have a charmed personal life which allows them to achieve the great things that they have achieved. But clearly, this was not the case with Satya Nadella.

They say that what doesn’t kill you makes you stronger, and having a child with special needs would, I think, certainly make you more empathetic, more generous, and overall, a nicer person. But I didn’t think it could actually make you capable of also rising all the way to the top as a business and technology leader, which is typically a highly competitive, cut-throat field. But, as it turns out, it can, as evidenced in Hit Refresh, in which Nadella describes how his personal experiences have shaped the way he leads Microsoft. It’s no longer just about being the market leader and increasing profit margins, but more about making a difference. It’s being able to steer Microsoft to use its vast engineering talents to continue developing devices and software that can improve the lives of millions of people around the world, using cloud connectivity, mobile access, data analytics and other technologies. It calls for cooperation with companies that were once bitter rivals, such as Apple, along with younger powerhouses such as Google. When the focus is more on doing good rather than on under-cutting rivals and being the “best,” even employees can feel imbued with a sense of purpose and meaning that makes their everyday work much more life-affirming.

For those curious about Nadella himself, Hit Refresh does provide a brief account of his background and journey from India to the US — a journey which will be familiar to many Indians who also came to the US to work in engineering and software — as well his many years working at Microsoft as he rose through the ranks before finally becoming CEO. The book also discusses upcoming technologies such as artificial intelligence, machine learning, mixed reality, and quantum computing, all of which seem promising to our continued improvements as a society and which Microsoft is exploring. Hit Refresh also has some discussion about politically sensitive issues such as privacy, security, and globalization, but not as much as I had hoped. It would have been very illuminating to know how a progressive technology company, which wants to have a global impact, can operate in a political climate that is protectionist and nationalistic, almost regressive?

While the subtitle of this book, The Quest to Rediscover Microsoft’s Soul and Imagine a Better Future for Everyone, is somewhat grandiose, it is a simple, non-pretentious, non-erudite, straight-from-the-heart account of how Satya Nadella — only the third CEO in Microsoft’s 42 year old history — has been inspired by his personal experiences to make empathy rather than competitiveness the essence of Microsoft, so it can contribute to making the world a better place for everyone.