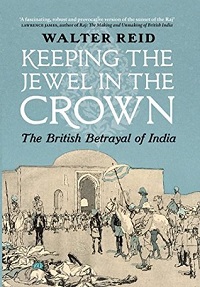 A brilliant book detailing the last three decades of the British Raj. The tactics used by successive British leaders to bring about irreconcilable differences between Hindus and Muslims are clearly outlined. The Brits used every weapon in their armoury to keep India in the crown. These weapons included deceit, dilly-dallying and divisiveness.

Britain’s prosperity had long depended upon the exploitation of faraway colonies. When the American colonies bid goodbye in 1776, India became the ‘jewel in the crown’. After the First World War, when the danger of losing India loomed large, the Brits acquired new territories in Palestine, Jordan and Iraq. Their commercial instincts remained uppermost.

A million Indians fought overseas in World War I and 54,000 died. The Brits followed different protocols for burying their own dead, whereas dead Indians were dumped in mass graves. The Memorial of the Missing at Basra (Mesopotamia) mentions about 8000 Brits by name. 665 Indian officers are named too but 33,222 Indian soldiers are reduced to a mere number. This was the pattern all over Europe: Cemeteries, tombstones and markers for the Brits, nothing for the Indians.

Churchill wrote in the Daily Mail in November 1929: “The rescue of India from ages of barbarism, tyranny and internecine war, and its slow but ceaseless forward march to civilization constitute upon the whole the finest achievement of our history. This work has been done in four of five generations by the willing sacrifices of the best of our race.”OMG! I’d always believed Churchill was a consummate racist but reading this statement really gave me the creeps!

When the Gandhi Irwin Pact was debated in the House of Commons on 12th March 1931, Baldwin made his infamous speech quoting a line from his cousin Rudyard Kipling, about the press having “power without responsibility…the prerogative of the harlot throughout the ages.”

When Lord Willingdon, Viceroy of India, was refused entry to the Royal Bombay Yacht Club because he was accompanied by Indian friends, he established the Willingdon Sports Club which was open to all races. Lord Linlithgow, who became Viceroy in 1936, was prone to chasing butterflies in the Shimla hills. The book has a sprinkling of uncharitable observations on political opponents by various personages. The author even mentions that Nehru’s Gandhi cap was made by Scot of London. And Jinnah owned over 300 suits.

On 3rd September 1939 Britain declared war on Germany and the same day Linlithgow coolly made a radio announcement that India was at war with Germany. Earlier in August he had already sent Indian troops to Aden, Egypt and Singapore.

“Gandhi…thought that in the face of Hitler’s aggression, German Jews and Czechs should simply resort to non-violence and Britain should submit to German occupation.” When VK Krishna Menon was asked whether he’d rather see India occupied by the Japanese or the British, he said, “You might as well ask a fish whether it preferred being fried in butter or margarine.” The remark ‘a post dated cheque on a crashing bank’ is usually attributed to Gandhi but it was Nehru who said it.

The League’s demand for partition was by no means unique. Elsewhere in the empire there were similar instances. Though the dominion of Canada was created in 1867, Manitoba, British Columbia and Prince Edward Island came in years later, and Newfoundland joined as late as 1949. When Australia became free, New South Wales and Western Australia chose to stay apart for years – and New Zealand became a separate country.

“Until the war, India had owed money to Britain. As the war went on she became a substantial creditor…” By 1945 Britain owed India 1260 million pounds. When the war ended Britain was indebted to the United States – and the loan was finally repaid only in 2006!

Of the INA, the author states: “The facts are that (1) about 40,500 Indian troops were captured in Malaya/Singapore of which 16,000 joined the INA; (2)a second unit of the INA was set up in 1943 and perhaps 24,000 Indian POWs were recruited; (3) at the war’s end there were thus about 40,000 men in the INA.” I tried to do the math. Only 500 soldiers were unaccounted for. Perhaps they had died or disappeared. In any case it looks like 100% of Indian POWs joined the INA, if British records are to be believed.

1942 was turbulent year. The Japanese captured Singapore-Malaya, Burma and the Andamans in quick succession. Gandhi launched the Quit India movement. “Rail and telegraph communications were struck at. In Madras, Bihar and the united Province, British servicemen were attacked and murdered…..The Government responded with enormous force……Rioters were fired at and aircraft were used to strafe saboteurs who were tearing up railway lines. In Bombay demonstrators were beaten with rattan canes. Order was not restored for six weeks.” It was estimated that 4000 to 10000 Indian lost their lives in the crackdown. On 31st August the Viceroy informed Churchill, “I am engaged here in meeting by far the most serious rebellions since that of 1857, the gravity and extent of which we have so far concealed from the world for reasons of military security. Mob violence remains rampant over large tracts of the countryside.”

“American forces had been arriving in India from the beginning of the year (1942) and by the end of the war there were half a million American troops there.” We learn a few interesting facts about America’s attitude to British imperialism. Just before the Cripps Mission set off for India, Roosevelt wrote to Churchill suggesting that a temporary dominion government be set up in India.

Churchill in his war memoirs claimed that “…the peoples of Hindustan…were carried through the struggle on the shoulders of our small island.” Feel like throwing up? So do I.