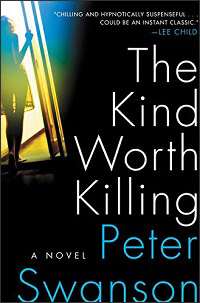 Being an avid fan of the mystery/thriller genre of books, especially when interspersed with more literary fare, I recently picked up The Kind Worth Killing which was written about in this forum by another contributor. A few weeks ago, I had also read and written about Strangers on a Train, a 1950s novel which was made into a movie by Alfred Hitchcock and which, according to the first write-up, had seemingly inspired this book. While I found The Kind Worth Killing a better read than Strangers on a Train, it does not come anywhere close to crime thrillers such as Gone Girl or The Girl on the Train, despite the best efforts of the publisher to promote it as such.

The book starts with two strangers, Ted and Lily, meeting in an airport bar where they share some drinks. They are on the same flight and manage to sit next to each other and continue their conversation. Ted has just discovered that his wife is cheating on him and he jokingly remarks that he would like to kill her. Lily asks him why not, in all seriousness, and offers to help him. It is definitely an intriguing plot line which draws you in, and while the rest of the book does not quite live up to its initial intrigue, it is interesting enough to keep you going. Do they actually go through with killing Ted’s wife? Why is Lily encouraging Ted to do this and why is she offering to help? Has she killed before, given that she thinks that some people are “the kind worth killing?”

While Ted and Lily don’t actually switch murders in this book as the main characters do in Strangers on a Train, what the two books have in common is that there are no twists as such, making them more of thrillers than mysteries. What I did find especially remarkable about The Kind Worth Killing is that you are actually rooting for the murderer, given his/her compelling back story. And just when you think that he/she got away with it — and are almost happy about it — the last three lines of the book unexpectedly throw a wrench into it. Justice might be served at all.

While the opening of the book immediately drew me in and the end showed some creativity, the rest of the book was unfortunately a standard, run-off-the-mill potboiler, with crass generalizations and stereotypes — beautiful wife, rich husband, wife wants to kill the husband to get his insurance money, wife seduces a not-too-bright guy and encourages him to kill the husband, husband falls for another beautiful woman, detective investigating the case also falls for a beautiful woman, and so on. And of course, there is plenty of sex. The quality of the writing was also quite pedestrian and far from classy.

Overall, The Kind Worth Killing is the equivalent of a popcorn flick — entertaining, even somewhat thrilling, but eminently forgettable as soon as it is over.