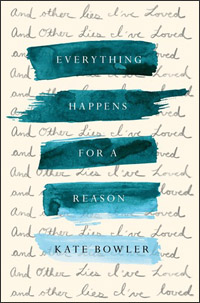 Anyone who has ever asked the fundamental question, “Why do bad things happen to good people?” would not be able to pass on this book without being intrigued by its title. It seems to be unequivocally saying that the platitude, “Everything happens for a reason,” that we hear so often being bandied about, especially addressed to people who are going through a tragedy, is a lie, plain and simple. For anyone who is not religious — who does not believe in a “grand scheme” for life, who does not believe in an afterlife, who finds the concept of “God” to be something that humans have fabricated to makes themselves feel that someone is in charge – for such a person, a book like this simply affirms what they already know. But for those who do believe that “everything happens for a reason,” this book is a must-read, especially because it is written by someone who was steeped in religion and knows exactly what that line of thinking is like.

The author of Everything Happens for a Reason: And Other Lies I’ve Loved is Kate Bowler, a professor at Duke Divinity School, who was not only brought up as a Christian and still follows it, but has spent her professional life specializing in the study of something called the “prosperity gospel” in Christianity, which sees fortune – notably money, success, and good health – as a blessing from God and conversely, any misfortune as a sign of God’s disapproval. While it may seem amazing to other people that such a line of thinking even exists – despite all evidence to the contrary, with innumerable people, including babies and children, suffering everyday through no fault of their own – it does, with plenty of preachers teaching it and plenty of followers believing it. Despite being an academic, Bowler also experienced her own “prosperity gospel” or sorts when she was able to conceive and give birth to a baby after several setbacks, had a book published, and was cured of a crippling physical ailment that had temporarily made her unable to use her hands and arms. All of this, and with a loving husband to boot, she was flying high. How could she not see herself as blessed?

But then, it all suddenly came crashing down. She started having several abdominal pains, and it was diagnosed as stage 4 colon cancer. With a survival rate of only 10% and no “cure” as such, Bowler had just been handed a death sentence. While she didn’t know exactly how long she had to live, she knew that sooner rather than later, she would die, and her baby boy would have to grow up without her and her beloved husband would have to bring up their son on his own. This has made her look anew at not just the prosperity gospel, but at many of the common religious beliefs people hold and which several of them tried to comfort her with — not just “Everything happens for a reason,” but also things such as, “God needs an angel,” “You will be in heaven and can watch over your family,” and so on. She now sees these not just as harmless platitudes that can help to comfort some people when they are dying, but outright lies that can prevent people from accepting the inevitable in good grace.

So far, Bowler is still living with the cancer, with traditional treatments and some promising new immunotherapy ones that are continuing to keep her alive, a few months at a time. But she does not know when her time will run out. Hearing first-hand from someone who is looking at death right in the face is a searing experience, whether you are religious or not. The book is chock-full of insights that can only come once you are in that place of knowing your days are numbered. (Actually, everyone’s days are numbered, but it’s easy to forget this in the hum and bustle of our daily lives.) And even for those who are not faced with this calamity yet, she provides some sage advice on what NOT to say to people who are going through tough times as well as what to say or do to help. Reading the book is worth it just for this alone.