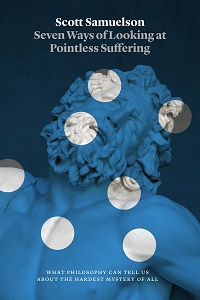 Life is tough. There is no getting around that fact. Even if you are not personally experiencing a crisis or a tragedy at the moment, you only have to look around you to see how much misery is there in the world. And this is not a new phenomenon — it has been like this since the dawn of civilization. The kinds of crises that we face may differ from generation to generation, but suffering seems to be very much a part of the human condition. Not only are we vulnerable to natural disasters such as earthquakes, volcanoes, hurricanes, and tsunamis just like any other species on earth, we also have to contend with wars, epidemics, poverty, starvation, injustice, crime, illness, and of course, death — not just of our own, but more painfully, of those we love.

What, then, are we to do? How can we cope with suffering? How do human beings, as a whole, deal with what seems to be an inevitable fact of life? The book, Seven Ways of Looking at Pointless Suffering, attempts to show us how. The author, Scott Samuelson, draws from his extensive knowledge and study of philosophy to highlight seven different approaches to suffering, ranging from the Book of Job in the Bible, to the teachings of Confucius, to philosophers such as Nietzsche, and surprisingly, even the Blues music genre that has slavery at its roots. While each of these has a distinct approach to suffering, they can, by and large, be divided into two main camps: fix-it, where you seek to eliminate it; and face-it, where you come to terms with it.

Interestingly however, these two camps are not as far apart as they may seem — we have to accept suffering as it is inevitable, but at the same time, we are hard-wired to oppose it. The drive to ameliorate suffering is responsible for all human advancements — witness the enormous strides we have made in medicine, agriculture, weather forecasting, technology, and so in, in every field of human endeavor. At the same time, we have to accept that just as you cannot have a right without a left, or an up without a down — the yin/yang principle — you cannot have joy without sorrow, happiness without sadness, and goodness without evil. In short, humans will continue doing what we can to “fix” suffering while reconciling to the fact that some of it is inevitable and we have no choice but to “face” it. In fact, suffering seems to be integral to human growth — most of our art, music, and literature has been created in response to it. This understanding is pivotal to our acceptance of suffering and learning to live with it gracefully.

While Seven Ways of Looking at Pointless Suffering seeks to provide insights into suffering for anyone seeking to understand it better, it is also unequivocally a philosophy book. This makes it essential reading for anyone who would like to delve into how different philosophers throughout the ages have thought about the question of suffering and its centrality to human existence. However, for those who are not particularly interested in philosophy as a subject to be studied, or in learning about different philosophers and their lives, this is not a book that they will likely read cover to cover. I found myself skimming though many sections of the book that seemed more like a history lesson on different philosophers, since I was more interested in learning about how people cope with suffering rather than what different philosophers have had to say about it. Few people now have the luxury of not having to work for a living, of having the time and the resources to ponder about life and its mysteries as they were able to do in the past. It’s one thing to arrive at an intellectual understanding of something, but another thing to actually feel it. This is why philosophy as a discipline has a limited appeal for me, and I didn’t appreciate Seven Ways of Looking at Pointless Suffering as someone who was into philosophy would have.

To me, the best parts of the book were when the author talked about his own personal experiences with suffering as well as the many discussions he had in the course of his volunteer work in a prison where he was teaching philosophy to prisoners. There is an entire thread in the book on the problem of evil — which is at the root of so much suffering — and the related issue of incarceration as a punishment for crime. I would have been interested in reading a lot more about that.

That said, I found Seven Ways of Looking at Pointless Suffering an invaluable read for its extended discussion of something that is a fundamental part of our existence and for its holistic look at suffering, not just as something to be accepted, but also as something it is in our nature to work to avoid. That goes a long way with learning to make peace with it.