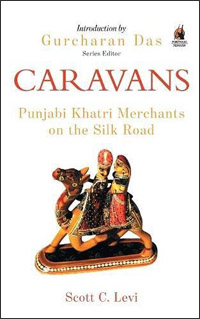 This book is part of a series by different authors detailing the global commercial activities of Indian merchants down the ages. It presents an amazing account of the trading practices of Punjabi businessmen, whose initiative and enterprise will certainly surprise the reader. Moreover, there’s a detailed account of the slave trade and the horse trade, which were inextricably intertwined.

India had been cultivating cotton and producing textiles from antiquity. Textile fragments excavated at Mohenjo Daro indicate that dyes were used for colouring. The Greek historian Herodotus had referred to Indian cottons.

The Arthashastra the Mahabharata and the Manusmriti refer to institutionalized slavery in India. Mahmud Ghazni took away not only India’s treasures but also hundreds of thousands of slaves. The Slave dynasty (builders of the Qutub Minar) also kept up the slave trade. When Timur sacked Delhi in 1398 he returned to Samarkand with plenty of wealth and slaves. Alauddin Khalji (ruled 1296-1316) had 50,000 slave boys and another 70,000 slaves engaged in construction works. Firuz Shah Tughlaq (1351 to 1388) had 180,000 slaves. Th author notes that, “The Mughals regularly included skilled slaves as gifts along with ambassadorial exchanges.”

In 1646 Shah Jahan’s army occupied Balkh and marched to Samarkand under Aurangzeb. Defetaed by the long, cold winter the Indian forces had to retreat. A central asian chronicler recorded that the Central Asian ‘wolves’ captured the retreating Indian ‘slave-sheep’ and sold them in the markets of Samarkand, Tashkent and Turkestan. The voluminous supply of slaves caused prices to plummet from 225 tanga in 1589 to 84 tanga in 1646.

The Lodi dynasty of Afghan Pashtuns (later overthrown by Babur) came to India as horse traders. “The fact that the ancient Indian ashwamedha, or horse sacrifice, is described already in the Rig Veda indicates that Indians were involved in this exchange many centuries before Herodotus,” the author points out. Marco Polo noticed that the Malabar rulers imported 10,000 horses a year at a cost of 2.2 million dinars – and all but 100 would be dead by the end of the year. Niccolao Manucci wrote in the latter half of the 17th century that 100,000 horses were led from Bukhara to India every year and 12000 of them went directly to Aurangzeb’s stables.

Successive rulers in India and Central Asia carefully protected the caravan trade. When Akbar learnt that Afghan and Baloch tribes were preying upon the caravans, he sent his army to subdue them. Thousands of tribesmen were killed and thousands more enslaved and deported.

The arrival of the Europeans did not impact the caravan trade. The Portuguese brought much silver from the Americas in exchange for spices and textiles. The 17th century French traveller Francois Bernier observed, “Gold and silver, after circulating in every corner of the globe, comes at length to be swallowed up, lost in some measure in Hindostan.” The French monk Raphael du Mans described India as a place “where all the money in the Universe is unloaded as if into an abyss.” Earlier in the 1st century Pliny the Elder and the anonymous author of Periplus Maris Erithraei had bemoaned Rome’s massive trade deficit with India.

Mulasthana or Mulastanapura became Multan in the 8th century following the Muslim conquest. Alexander the Great took the city in 326 B.C.E. 13th century records identify Multanis as money-lenders and wholesale textile dealers for the first time. Indian merchants were considered indispensable to the local economy and the term ‘Multani’ referred to both Hindus and Muslims. As Multan began to suffer repeated invasions in the mid 17th century, Multani merchants relocated en masse to Shikarpur in Sind.

In the 17th century the French jeweller Tavernier commented that Indian money-changers or Shroffs surpassed the Jews in their shrewdness. The Punjabi Khatris prospered due to Mughal patronage but outlasted several dynasties in India and Central Asia. There were Marwari Jains in Astrakhan in the 17th century.

Nadir Shah’s reign was the most disruptive period in the history of the Indian merchant diaspora. In 1736 he slaughtered the Hindu communities across Iran. After his assassination in 1747 Indians began to return.

Indian presence in Russian territory diminished in the second half of the 19th century due to Russian expansionist policies and harsh restrictions imposed on Indian businesses. Ivan the Terrible had annexed the Khanates of Kazan and Astrakhan in the 16th century. The 1917 Revolution virtually ended Indian enterprise in Russia. With Partition in 1947, the Indians in Afghanistan had to move elsewhere, as the trade lines were cut off.

In 1914 Paramanand Deepchand Hinduja moved from his native Shikarpur in Sind to Bombay where he established firm. Five years later he moved his business to Iran. When he passed way in 1971 his successors maintained a close relationship with the Shah as well as the Indian government. The business shifted to Europe after the 1979 Islamic Revolution but continued to thrive. Today they employ 70,000 people in 35 countries and have assets worth an estimated $35 billion.

Years ago I was travelling in Uzbekistan with a few women. We were frequently accosted on the streets by local women asking to be photographed with us. They would first ask “Hindustan? Hindustan?” and when we nodded they would signal that they wanted a picture. This happened in not only in Tashkent but also in Bukhara and Samarkand. I suspected it was Bollywood mania, but after reading this book I can see other reasons too.