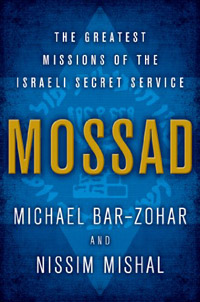 Iran had been threatening to wipe out Israel from the face of the earth. What would the Israelis have done without the Mossad, their secret service network that seems to have no parallel anywhere in the world? Israel has more hostile neighbours than any other country. And Jerusalem has, for thousands of years, been the most disputed territory on earth. Now this does not justify or rationalize the Mossad’s undercover activities, and yet……it certainly makes you ponder!

This book gives an account of the Mossad’s multifarious activities, some of them benign and humanistic like the transfer of thousands of Ethiopian Jews through Sudan to Israel, and others deadly and diabolic like the cold-blooded elimination of those identified as enemies of Israel. One develops a grudging respect for spies in general and the ‘art’ of espionage in particular. And one begins to wonder whether there is anything that the Mossad doesn’t know!

The authors provide many thrills, among them:

1) A spine-chilling account of the Nazi fugitive Adolf Eichmann’s detection and capture in Argentina and his hush-hush transfer to Israel to stand trial.

2) Inside information of the systematic sabotage of Iran’s nuclear program, not to mention similar ventures in Syria and Iraq.

3) A vivid description of the daring assassination of Mahmoud Al-Mabhouh, a Hamas kingpin in Dubai in January 2010. This operation was carried out in the full glare of CCTV cameras. Within 6 hours of the man’s arrival in Dubai he was dead. The Mossad’s 27 member hit team was out of the country within hours of the assassination. The comings and goings were watched worldwide on YouTube.

Some of the ultra fascinating chapters include: The Quest for the Red Prince, I want a MiG 21, Saddam’s Supergun and “Oh that? It’s Khrushchev’s Speech…!” On second thoughts, every page is mind-blowing. It’s hard to pinpoint the best parts.

I can’t help wondering what Mossad is doing about ISIS right now. I guess that will remain under wraps for a few decades more – until someone writes another tell-all book.

Overall assessment: Sure to make your hair stand on end. No wonder they say ‘truth is stranger than fiction.’

Reviewer: Pushpa Kurup lives in Trivandrum, India and works in the IT sector.