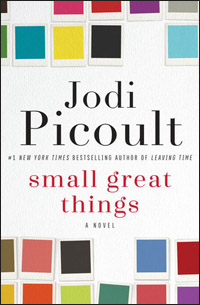 Jodi Picoult is a prolific novelist. She has written over 25 novels in a span of 24 years, many of which I have read. Her writing is not high literature by any means, the kind that would win prestigious awards, but her books are very entertaining, absorbing, and well-written, making her a highly successful writer whose books are extremely popular. She also typically touches upon some weighty issues in each of her novels, such as organ transplant (Change of Heart), a school shooting (Nineteen Minutes), religious belief (Keeping Faith), autism (House Rules), genetic engineering (My Sister’s Keeper, a riveting book that was also made into a movie), and many others.

In her new novel, Small Great Things, she takes on the hot-button issue of racism, which has emerged to the forefront in the U.S. in the last couple of years, with the shootings of black men, the Black Lives Matter movement, and of course, the 2016 Presidential election (which, at the time of writing this, is still 11 days away). The title of the novel comes from this quote by Dr. Martin Luther King, Jr.: “If I cannot do great things, I can do small things in a great way.” Almost all of Picoult’s novels revolve around a lengthy court case, where the issue at the heart of the novel is taken to court and ultimately settled—usually favorably—after the requisite back and forth between the prosecution and the defense, and Small Great Things is no different in this regard.

The story revolves around Ruth, a black woman (albeit lighter-skinned than the average African-American), who is a nurse in a the maternity ward of a hospital and has been doing this devotedly for 20 years—she is very good at her job and is widely respected as being the best there is. Her world turns upside down when a hate-filled white supremacist couple comes in to have a baby, and then after the baby is born, specifically ask that Ruth be taken off her nursing duties for their baby because she is black. The baby dies after a complication and Ruth was present in the room when the death happened, and before she knows it, she is slapped with a lawsuit by the parents accusing her of murdering their baby. If it seems preposterous, it really is, and I thought the weakest aspect of this book was in its premise—a white couple suing a black nurse for killing their baby. Really?

Once you get past this issue, however, the book is as well-crafted as any of Picoult’s other books. She has mastered the art of writing books with a certain style, and Great Small Things is no different. It is substantial, and comprises equally of internal dialog and external action. The story is told from the points of views of three different narrators—another quintessential Picoult approach. And as with her other books, a large part of this one takes place in court with witnesses, testimonies, cross-examinations, opening and closing statements, and other legal paraphernalia. There is also a twist at the end, which again usually happens in all Picoult’s novels. Thus, Small Great Things is quite formulaic, coming unmistakably from Picoult’s oeuvre. I would have known she had written it even if was published anonymously!

Where this book is different is that it does not just highlight racism—similar to how her other novels highlight different issues—but that it also digs a lot deeper and exposes the difference between overt racism—of the kind blatantly exhibited by white supremacists­—and implicit bias—which most white people have but are not aware of it. They take their place in the world for granted, the opportunities that they have, how they fit right into society, the common courtesies they receive, the professionalism they encounter in most places, and so on, without even being aware that it is different for black people, even if they are just like them in all other respects. The public defender who takes on Ruth’s case is a white woman, who would never think she was racist in any way; however, it is in the very act of not wanting to be racist, or not seeming to be racist, where the implicit bias comes in—the fact that you are conscious that the person is different so you need to behave in a certain way, be extra nice, or be extra polite. You would never feel like this if the person has the same skin color as you.

Picoult explains in an Afterword that she realized she had the same experience being a white woman and wanted to write about racism and bring this issue to the forefront. I think she has accomplished this very well. While the plot of the story in Small Great Things is far-fetched, the exploration of racism, both explicit and implicit, is very well done. In particular, the implicit bias will hit everyone hard because it applies to most people. To a certain extent, it is human nature to take your own privilege for granted, especially if it does not seem like one and most people around you are just like you. But it’s important to be reminded of it, as usually it is so subtle that we’re not even conscious about it. If not for anything else, Small Great Things should be read just for this.