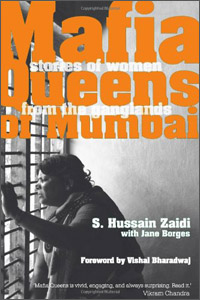 There is high drama, there is intrigue, there is gang warfare, there is crime and punishment – and in the midst of it all, in the soft dark under-belly of the Mumbai underworld. there are ‘crime madonnas.’ We in India have heard of the notorious triumvirate that ruled India’s commercial capital then known as Bombay – the Tamilnadu born Haji Mastan, the Chennaiite Varadharajan Mudaliar and the Afghanistan born Karim Lala – until the Emergency intervened to bring about a reversal of their fortunes. When Vardha (as Varadharajan Mudaliar was known) died in Chennai in 1988, Mastan chartered an aircraft to bring his body back to Bombay for a funeral that any king would have envied. Mastan was the darling of Bollywood and we have seen pictures of him with Dilip Kumar, Sunil Dutt, Madhubala and countless others. We have also heard of Dawood Ibrahim, Chota Rajan and other sundry characters, many of whom are absentee ganglords, rather than hands-on local dons. But the names of the women in mafia-land are new to us. Thus this book is an eye-opener in more ways than one. It tells us the mafia is not a male club.

Take Jenabai (Zainab) Chaavalwali, who participated wholeheartedly in the Independence movement and opted to remain in Bombay with her five children in 1947 when her husband Darwesh chose to migrate to Pakistan. In times of acute grain shortage, she acted as a middle-woman between wholesale grain merchants and dealers. Wow! Later she married Iqbal Gandhi but never called herself Mrs. Gandhi. She met Vardha who initiated her into the art of bootlegging in the early sixties. Soon she became rich and famous as Jenabai Daaruwali. Vardha introduced her to Mastan. Dawood Ibrahim was then a teenager and his parents Ibrahim Kaskar and Aamina were close friends of Jenabai. It was Jenabai who intervened to bring about a truce between the Pathan gang and the Ibrahim brothers, Dawood and Sabir, sometime in 1980. The truce was short-lived, but Jenabai herself lived until the ripe old age of 74.

The women in the book are spectacular – and that’s a gross understatement. Kudos to Zaidi for bringing them into the public gaze! Ever heard of Gangubai, the matriarch of Kamatipura? Well she owned a black Bentley and met Prime Minister Jawaharlal Nehru to lobby for the decriminalization of prostitution. She smoked bidis, drank Ranichaap (whatever that is!), chewed paan and gambled to her heart’s content. And yet, they say she had a heart of gold. She never married but adopted several children.

Did you know that from the early nineties the Mumbai drug trade (vaguely estimated at 1000 crore) was dominated by a female troika – Jyoti Adiramalingam, Mahalaxmi Papamani and Savitri? You won’t find them on Wikipedia. Google their names and you’ll draw a blank. But the authors actually met two of them. Sapna Didi, who tried her best to avenge her husband’s murder by Dawood’s men and lost her life in the attempt and Bollywood starlet Monica Bedi, the love interest of Abu Salem, are also featured in the book, perhaps to attract new-gen readers.

Is the female of the species more deadly than the male? Read the book and find out. Written by India’s best known crime reporter, “Mafia Queens” delivers a lot more than it promises. The style of the master storyteller is unmistakable. Faction and fiction are artfully blended together to present a fascinating experience. “Mastan called for his black Mercedes and walked Jenabai to the car. As the car left Baitul Suroor, the lights in the villa gradually dimmed and faded to black.”

Overall Assessment: Not to be missed.