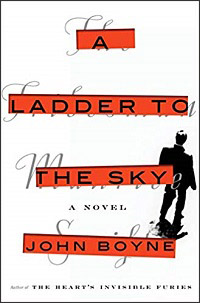 What encouraged me to pick up this book was the fact that it was written by the same author who had written The Boy in the Striped Pajamas, a book I hadn’t read but whose movie adaptation I loved. Also, the premise of the book, as captured in the blurb on the jacket cover, seemed intriguing — it was about a man who wants to be a published author by any means necessary, and he will do anything to achieve this. In this day and age, a book about a man who sets so much store by the literary word is quite a rarity!

To be fair, the man in question is not strictly of the current generation, but of the preceding one. Our first encounter with Maurice Swift is in 1988, when he is a young man working as a waiter in a posh restaurant in Germany and meets a writer in his 60s. Already very good-looking — which he uses to great advantage through his youth — Maurice turns on his full charm and quickly ingratiates himself with the older man, drawing out a dark, closely held secret from him that he then uses as the plot of his first book. For Maurice has no real talent — he can write reasonably well, but cannot come up with any ideas on his own.

Maurice continues to build his literary career on the work of others — literally climbing on their “rungs” up the metaphorical ladder of fame. (This is where the name of the book comes from.) While people who are manipulative and conniving are not that uncommon, Maurice’s literary ambitions are so intense that he can literally kill to achieve them — and he does. While disclosing whom he kills and how, would be giving away too much of the book, it is all there, making the book not just a drama but also a thriller or sorts.

I really enjoyed this book. While it is not the kind to be heralded by literary critics, I found it extremely well written with no literary artifices. The story telling was simple and straightforward, yet compelling. It turns out that the author, John Boyne, also writes books for children in addition to writing for adults, which likely accounts for his straightforward writing style, making the plot the focus of the novel and avoiding any stylistic flourishes that often get in the way of the story.

That said, what was not so straightforward about the book was that the story is told not only from perspective of different characters but also from multiple points of view. It starts with the first person written from the point of view of Erich, the older writer who is the first “rung” of Maurice’s ladder to the sky; this is followed by a second person narration from Edith, Maurice’s wife for five years before she dies (she is also a writer); a third person narration of Maurice’s life in New York where he has founded a literary magazine following the success of his books; and finally, a first person narration by Maurice himself in his fifties, when it all comes crashing down on him. Along the way, there are some “interludes,” most notably one with the acclaimed author, Gore Vidal, who sees through Maurice right away. While this multiple point of view narration was a bit disorienting, it did not necessarily detract from the story. And I suppose as a writer, you are obliged to break some rules and do something different sometimes!

One thing that definitely detracted from the book was the blurb on the jacket cover, which gave away the plot of the book right away rather than letting it come forth naturally to the reader as it would have done some way into the book. The first person narration from Erich at the start of the book, where he meets Maurice for the first time, would have been a lot more compelling had we not known upfront that Maurice was just scamming him to get a leg up in the literary world. This spoiler, right upfront on the jacket cover, was a pity, as it somewhat diminished what would otherwise have been a very strong opening for the book.

The fact that I enjoyed the book so much despite this spoiler is a testament to how good it was.