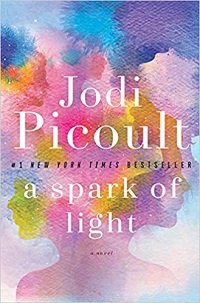 For me, Jodi Picoult has, until now, been one writer whose books almost come with a guarantee of being a good read. I have read most, if not all, of her books so far. While her most recent novels, Leaving Time and Small Great Things, were not as good as her previous books, they were still very readable. I was looking forward to her new book, A Spark of Light, as a sure-shot good read rather than something I would have to read a little of to decide if I want to continue reading it or not.

I am so sorry to say that with this book, Jodi Picoult seems to have fallen off the bandwagon. The book started so badly that I was not even sure if I should continue or give up on it and find something else to read. Finally, I did decide to stick it out, based entirely on the strength of how much I had enjoyed her earlier books. I have to admit however, that at some point, I just speed-read through the rest of the book because it got too boring and I couldn’t wait to be done.

A Spark of Light is set in an abortion clinic in a town in Mississippi, a state with strict anti-abortion laws, and it tells the story of a single day, unfolding hour by hour, when a gunman bursts into the clinic and starts shooting. While a couple of people in the clinic, including the owner, are killed right away, the others are taken hostage, and the novel explores each of their individual lives and what has led them to be at the clinic on that day. They include a doctor who does the abortions, a nurse practitioner, a woman who has just had an abortion, another woman who is actually an anti-abortion activist and has come to the clinic pretending to need an abortion so she can spy on what’s going on inside, an older woman who has received a diagnosis of cervical cancer, and a fifteen year girl who was visiting the clinic with her aunt to just get a birth control prescription. The girl’s father is a local policeman who is outside and negotiating with the shooter to let the hostages go. We also get to learn more about the shooter and what motivated him to come to the clinic that day with a gun — it turns out that his seventeen year old daughter had just visited that clinic recently for an abortion, and he was a born-again Christian who was strongly pro-life.

While the plot is clearly an attempt to weave a story around the hot-button issues of abortion as well as mass shootings, A Spark of Light is completely devoid of Picoult’s usual taut and tense writing style that have made her previous books so difficult to put down. Here, the characters don’t seem real — they feel like caricatures — and it’s hard to get emotionally invested in them or even to care about their back stories. And there are so many of them, right from the start of the book, that it was extremely confusing. I had to keep going back to the beginning to keep their stories straight. Another aspect of the book that made it not just difficult but hard to enjoy was that it is told chronologically backwards, starting with the events at 5 pm that day, then 4 pm, and so on, until 9 am in the morning. So as you read the book, you already know what has happened.

As it is, it was hard to care about the characters, and with the knowledge of how the story unfolds, even the normal suspense that is there is any story was gone, making the book even more unreadable. While I can appreciate that authors, especially when they are well established, like to flout convention and break rules, it boggles my mind so to why a writer would deliberately choose to write backwards and still expect the book to be enjoyed by readers.

Needless to say, I was hugely disappointed by A Spark of Light. I had been looking forward to it so much.